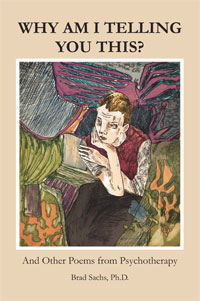 Having identified and envisioned myself as a poet long before I became a psychotherapist, I have always tried to listen for the poetry nesting in the province of my patients' tumbling narratives. In a way, it should not be a surprise that psychotherapy patients speak the language of poetry because poetry arises from much the same psychological state that therapy does. The therapeutic experience and the creative experience rely upon a similar loosening and softening of the boundaries between inner life and outer life, past and present, certainty and doubt, dream and awakening-both serve as bridges between what is revered and reviled, what is sought and abhorred, what is desired and discarded.

I do not take notes during clinical sessions, but I always reserve some time after each appointment to write up a page or two of comments. This documentation is generally comprised of a summary of the clinical content and personal matters that were attended to during that particular session, as well as a laying of the groundwork for the following sessions (concerns to address, questions to ask, assignments to follow up on, themes and hypotheses to pursue). However, I have always tried to conclude my note-taking by composing one poem-even a very short one-that, to me, captures an important facet of the patient's experience.

Sometimes, the poem that results is a simple, close-to-verbatim transcription of a fragment of the patient's actual words during an appointment. Sometimes, the poem is a short distillation of a much longer narrative that the patient had spilled out, pared down to (what is in my opinion) its elemental meaning. Sometimes, the poem is composed of words that the patient never actually spoke, but that I imagine s/he wanted to speak, and would have spoken had his/her internal editor or censor not interrupted the flow of feelings, shut the wires down, and buried the signal beneath thick layers of emotional batting. Sometimes the poem is a reduction, a written crystallization of what the patient was revealing to me, and/or to him/herself, throughout the course of several separate sessions, or perhaps even throughout the entire course of treatment itself.

When I first began the process of conceiving these poems, I held the belief that I was essentially playing a passive role, one that was somewhat akin to a ventriloquist's dummy, manipulated (albeit in the best sense of that word) into channeling or articulating the patient's truest, purest voice, the one that yearns to be spoken and that longs to be heard-and without there being any observable effort or authorship on my part. But in re-reading, re-visiting and re-experiencing them as I prepared this collection, and reflecting upon what I'd actually composed, the process began to seem more complicated than that, somewhat mysterious and elusive, not quite so easy to pin down.

Somehow, when the patient's inner world and my own inner world experienced a particular kind of encounter that was both observable and invisible, collision and embrace, mesh and clash, something important passed between us, and the poem-or at least the germ of the poem-until then lying silent and dormant, suddenly or gradually revealed itself. Somehow an intimate encounter with an Other stirred me to my depths, and a poem insisted that it be written, a therapeutic tale demanded to be told. Somehow the words that were regularly exchanged between my patient and I were alchemically condensed into literature, and it was as if the two of us had uncannily co-authored a chronicle that I transcribed, one that made us both feel more connected and more human, better able to sense a better way of being in the world.

Walt Whitman wrote, "I say the word or two that has to be said.and remind every man and woman of something," Regardless of how they arose-within me, within my patient, or, perhaps more accurately, within the sacred space created by and residing between the two of us-these poems in each instance represent a small vignette of the human predicament, one that reflects and refracts both the wondrous darkness and the difficult light that lies beneath all of us. It is for this reason that I have chosen to share them.

No smoking in here, eh?
I figured as much
Figured you'd be a clean liver
Look at you sitting there
All healthy
Clean clothes, clean lungs
Nothing dirty about you
Except your shoes,
They look a little shabby
But everything else
Rosy and clean-cut
Ever been in trouble?
Ever owed anybody money
And you didn't have a dime?
Ever sleep with a woman
Whose husband wanted to knife you?
Ever sat up all night
With a needle in your veins
And you still want it?
Ever screamed to God?
Just screamed your freaking lungs out
Yelling,
"God, God,
"Oh, God, Oh, God"?

Why Am I Telling You This?

Stuck at home all weekend after that blizzard
My kids were driving me crazy, fought the whole time,
My husband didn't want to do anything
Except watch poker on TV
I made brownies, batch after batch,
Ate more than all the kids combined
Must've gained 5 pounds in 2 days
Feel like a whale, now,
Like a beached whale.

What's with that stupid little cactus on your desk?
It looks ridiculous.
I'll tell you, though,
Sometimes I feel like I'm a cactus
Trying to figure out how to live all these years
With no water
No rain
Hot in the big, empty desert
Poking out those sharp needles
So no one will touch me.
Look at how some of those needles
Have fallen off
Isn't that interesting?

A stuffed animal,
Newspapers, all the time
Cough syrup
A watch, which is stupid
Being that my father sells watches for a living
A bra
Sodas left and right
Gum, of course
Doesn't everyone steal gum?
A bottle of perfume
That broke in my pocket
I was sure the guard would smell me
On my way out
Onions, once
I'm not really sure why.
Onions.

I Don't Know Why

I open my legs
And I let him

This one's my payback child
She's paying me back
'Cause I drove my mom crazy
Some moms say,
"What did I do to deserve this child?"
Well, not me-I know what I did-
I made my mom nuts
And now this one's making me nuts
Meanwhile, my mom's gotta be laughing at me
Up in heaven
Laughing at her daughter's ass getting kicked
By her darling little grand-daughter
Hell, they're both probably laughing.
I wish I could hear my mom laugh.

My father was in Bergen-Belsen
He told me that one day
They lined up a bunch of prisoners,
Single-file,
One behind the other,
Pressed them tightly together
To see how many could be killed by a single bullet
I'll always think of my father standing there
Praying for the fat and the bones
Of the poor men in front of him
The poor men who saved his life

My husband says nothing anymore
Every conversation is like pulling teeth
Won't talk about his work, about the kids
About our not having had sex in months
Nothing
God,
Did I tell you
The car in front of me hit a deer the other night?
There was this giant explosion in the dark
And my windshield was suddenly covered with tufts of fur
Couldn't see at all for a few terrifying seconds
Until it all blew away
I drove past
The deer was on its side
On the side of the road
It had these giant, empty eyes

I've slept with 25 guys this year
I make sure I lose control
By drinking myself into a stupor
Shot after shot
Oh, the guys love me
They wait for my weave and stagger
My slurred words
That's when I know I'm ready
I'm on my back in no time
Thinking about fathers floating down.
Did I say fathers?
I meant feathers.
Thinking about feathers floating down
I always think about feathers

I Think I Remember

Our son died back in August
On New Year's Eve
We got call after call
From friends and family
Wishing us a good year
Wishing us a better year
Fuck 'em all, and their good wishes
Not one of them was my son

I dreamt I awoke
To a beautiful song
That I could not sing
It went,
Where am I going?
How will I get there?