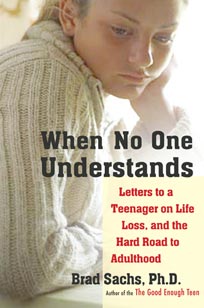 WHEN NO ONE UNDERSTANDS
LETTERS TO A TEENAGER ON LIFE, LOSS, AND THE HARD ROAD TO ADULTHOOD
(Shambhala, January 2007)

One day two taut and haggard parents arrived at my office with their 16-year-old  daughter, Amanda, who had been discharged the day before from the hospital following her third suicide attempt.  Amanda had been in treatment for several years, and had been hospitalized on two previous occasions, with little resultant success. This most recent suicide attempt had also been her most lethal oneafter swallowing dozens of pills, some prescribed, some over-the-counter, she had washed them all down with half a bottle of vodka.

Fortunately, one of her close friends knew something was up when she tried to IM Amanda and encountered a morbid Away Message, and had then alertly called Amandas mother when Amanda didnt answer her cellphone.  Her mother discovered Amanda lying, unconscious, on the floor of her bedroom, called 911, and she was transported by ambulance to the ER.  Once medically stabilized, she was transferred to an inpatient psychiatric unit for three days, and then released with the expectation that she participate in therapy.  A colleague of mine who worked at the hospital provided the family with my name, and they called the next day to schedule their initial consultation.

Amanda, of course, like most of the adolescents I see, was coming under protest.  Not only was it not her wish to be treated, but, according to the previous therapists notes, she seemed to assiduously resist every effort on anyones part to promote change.  Meanwhile, she had already been diagnosed with and treated for a wide-range of mental illnessesBipolar Disorder, Borderline Personality Disorder, Dysthymic Disorder, Major Depressive Disorder, Schizoaffective Disorder, Adjustment Disorder, Attention Deficit Disorder, and Dissociative Disorder.

At first, Amanda was no different with me than she had been for any other well-meaning clinician.  In fact, it appeared that she had taken a vow of silence, as she sat mutely, both when her parents were in the room and when she was alone with me, staring sullenly at the floor and slowly bobbing her head, as if to an invisible source of mesmeric music.

No stranger to situations of this sortjust like anyone else who works with adolescents in any capacityand knowing that unconventional therapy, particularly with teens, is often the most effective therapy, I looked for other ways to bring about some contact, some growth, and some healing.  Rather than attempting to cajole her into superficial, monosyllabic conversations, I took note from her clinical records that she was an avid reader and creative writer, and decided to try to embark on a letter-writing relationship with her as a less invasive, more productive, way of establishing a connection.  For whichever of the indiscernible reasons that account for the mystery of human behavior, she decided to join me in this shared endeavor.

Recently, and somewhat fortuitously, Amanda attended a signing that I was doing at a local bookstore.  Heartened to get an update, and to see and hear how well she was doing as a young adult, I left the store in a reverie, marveling that, for most of the first months of our treatment together, she had not said a single word to me during any of our sessions.

As I drove home from the book-signing, it occurred to me that collecting and editing the letters that Amanda and I wrote to each other might provide a useful  framework in which to share my thoughts about adolescent growth and development directly with teenagers, as well as with parents of teenagers, and with educators, clinicians and other professionals who have committed themselves to working with teens.

While I originally conceptualized this book as one that would include both sides of our correspondence, after sharing that version of the manuscript with selected colleagues, parents, and young adults, and soliciting their response, I came to the conclusion that limiting the text to my letters actually heightened my capacity to speak to the reader more intimately.  So after much consideration I decided to cut the book in half and focus exclusively on the words that I struggled and dared, from my most empathic heart, to offer to Amanda, the words that became part of the rescue raft that carried and delivered her to safer psychic shores.

WHEN NO ONE UNDERSTANDS, then, is a synthesis of twenty-two of the (more than fifty) letters that I wrote to Amanda throughout the course of her therapy with me.  While you will quickly observe that some of Amandas difficulties and behaviors  were more worrisome and extreme than those that you (or those whom you are rearing, teaching, or treating) might personally have encountered or displayed, you will gradually come to understand, as you read, that her journey serves to illuminate many of the most common and elemental conditions and contradictions inherent in every adolescents life.

All teenagers, regardless of gender, generation or background, must at some point engage in the universal, time-honored, and mythic struggle to navigate the bewildering, sometimes harrowing, pilgrimage from childhood into adolescence.  While the specifics of that transformation will always vary from person to person and never match up precisely, there is always much more that we share and have in common than there is that is distinct and distinguishing.

So let me welcome you into the privacy of a therapeutic bond, and share with you one-half of the conversation that Amanda and I created together.  In learning more about how our relationship unfolded you will find yourself better able to gaze into, perceive, comprehend and honor your deepest fears, longings, sorrows, and dreams.  And this will in turn nourish my sincerest hope and belief that WHEN NO ONE UNDERSTANDS will gently guide and fortify you as you set forth through the labyrinthine passages of adolescence that ultimately yield to the remarkable birth of your singular adult self.